This Blog is Totally Nuts

So, I'm spending a lot of time and energy trying to cut plastic out as much as possible. 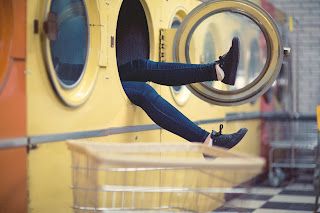 This is pretty rough since basically everything is packaged in single use plastic, but we're doing our best.  One of the things I'm doing and that I've found to be totally worthwhile, is I switched to Soap Nuts.
Yep, go ahead, say it out loud a few times.
Basically everyone in my house likes to go about saying it in a very slanderous way, including the 4 year old.  It's pretty funny overall, so you see, they're better for the environment, and also hilarious.  At least if you have a good sense of humor.

Soap Nuts are not actually nuts at all, they're a berry.  They grow on a tree called the Soap Berry Tree (very original name) which is indigenous to the Himalayas.  What do I use them for?  Laundry detergent.  I stopped buying laundry soap and started buying these approximately 2 months ago and finally, last night in fact, the consensus came back that the family approved of their use and I may continue to wash their clothing in this manner. (As if I needed their approval *eye roll*)
Now, I'm sure you're asking yourself, whats wrong with laundry detergent?  Well, truth be told, sort of a lot.  First of all, the carbon footprint of using laundry detergent is estimated to be about 1.5 lbs per load, which is actually more than driving 1 mile in your vehicle.  Also, this 1.5 lbs doesn't include the carbon emissions expended to run and actually use the washing machine.
It may also shock you to find out, most likely, your soap is toxic.  Laundry detergent contains chemical surfactents (aka: Surface active agents) that help to loosen dirt and grease from your clothes.  However, when your wash water runs out, they don't disappear.  They often pollute water ways, causing a negative impact on the environment.  They reduce the surface tension of water and do not disburse well due to their chemical make up.  This causes water creatures to be more susceptible to pesticides and other pollutants, they also destroy the protective mucus layer of fish lowering their preventative capabilities against parasites and bacteria. Lastly, they disrupt the endocrine system of humans and animals.  Your endocrine system controls the regulation of hormones affecting sleep, metabolism, growth, development, reproduction, mood, and sexual function.  So, I think we can all agree that is probably bad.  There are several laundry detergents known to the EPA to be connected with the development of cancers, and if you're not interested in Soap Nuts, you should at least check there website for some suggestions of safer products. I will provide the link to that page below.
Outside this really depressing information I've just given you, laundry detergent is packaged in plastic.  Plastic doesn't biodegrade, as I've discussed in the past, and will probably continue to mention until I turn into Charlie Brown's mother.  I mean, maybe it will degrade in like 500 years, but also maybe never and lets face it, 500 years is a really long time and might as well be never.  Also, a lot of laundry soap containers are not recyclable, so they are pretty much just garbage that we have to keep around forever which is definitely wasteful.  If you're going to keep using laundry soap, another good option is to check that the packaging is recyclable, and then, put it in the correct bin when you toss it.


Alright, since I now feel I have sufficiently convinced you that laundry detergent is suspect, let me talk about Soap Nuts. 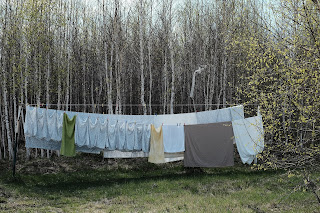 Obviously, they're a natural product and less obviously, they create a natural cleaning agent called Saponin.  They don't actually make soap at all, and it's quite beyond me the naming structure of this whole plant, but they do wash clothes really well.  They actually create a natural surfactent, that lifts dirt and grease, without the downsides of all the chemical surfactents I listed above.  One of the great aspects of soap nuts is they don't negatively impact the environment or the body.  They are 100% biodegradable and they don't pollute waterways.  They can easily be tossed in the compost when you finish using them, if you're into that sort of thing.  They are also, totally hypoallergenic.  They're even recommended for people with eczema and psoriasis. (Also, in case you're wondering, they're nut allergy safe...you know...since they're not nuts)
I buy mine on Amazon, I also purchase the organic ones. Purchasing things that are certified organic supports sustainable farming methods because in order to meet the certification standard, you are pretty much forced to also produce the product in a more traditional fashion thus cutting waste.  Soap nuts are also, super simple to use.  They come in a fabric sack, which you can use for produce later if you buy a big enough bag, for sustainable gift wrap, or you can just toss to biodegrade if you don't need it.  Inside the sack will be another tiny sack, I put about 8 nuts in mine and just throw it in with the load.  The berries last about 8 to 10 washes for me, then I switch them out.  If I feel like something is particularly smelly I will sometimes put a couple drops of lemon essential oil in the wash also, but that's pretty rare.  Another upside of soap nuts, is you will probably save money.  For about a years supply, its between $40 and $50.  Which I was buying at least $10 worth of detergent almost every month since we like to keep our laundry pretty up to date and wear a lot of clothes. (Also Roy has very sensitive skin, so I always had to buy more high end hypoallergenic brands)
Now, I'm sure you're wondering, how does it smell? Are the clothes really clean? Well I can attest, Roy goes to the gym pretty much every night now and practices BJJ.  When he comes home his GI is literally soaking wet with man sweat and stinks.  I throw it in the wash and run it with soap nuts every night.  It always comes out clean and doesn't smell.  Which he has commented is not the case with most of his gym partners.  (FYI if you are reading this and go to Roy's gym. LOL)  Mostly all our clothes smell like nothing since I'm not regular on putting in fragrance.  I also am happy to report I managed to use soap nuts and lift out a whole mess of triple berry jam from my daughters dance leotard. (Thank God) So they get a hearty two thumbs up from me. 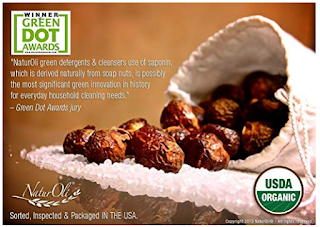 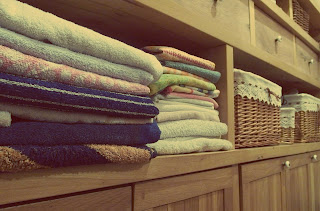